SKETCHBOOK: a creative tool and a way of life that celebrates design and drawing as vital ways to see and value culture, to discover ideas, and to envision a better world.


It was, indeed, a glorious weekend, part academic symposium, part concert festival, part therapy group, part church service, part family reunion.  And somehow, through a circle of relationships Patti and I have been lucky enough to connect with over several years, it was an opportunity to share a gift in a deeply meaningful way.


A few months ago, I received an email from Grammy award winning singer-songwriter Rosanne Cash, asking if I’d consider a commission to create a painting of her father Johnny Cash’s boyhood home in Dyess, Arkansas—a New Deal resettlement colony where her dad was raised.


The house and surrounding land had recently been restored and placed on the National Register of Historic Sites, and now served as a tribute to the family’s musical legacy and a living heritage laboratory, largely through the long and persistent efforts of Dr. Ruth Hawkins, Director of the Heritage Sites Program at Arkansas State University.   Ruth is also a special friend of ours,  a Hemingway scholar and author who Patti and I had traveled to Cuba with in 2014. The painting was to be a secret retirement gift for Ruth from Rosanne Cash and her siblings, and would be presented to her at the Johnny Cash Heritage Festival in Dyess in the fall.

A few weeks later, the painting was completed and sent to Rosanne’s manager, and Patti and I were invited to attend the presentation at the festival as special guests. At the festival, accompanied by friends and serious music fans Keith and Leta Jones of Little Rock, we heard fascinating and sometimes deeply moving presentations by cultural researchers, artists and filmmakers, all while keeping a very low profile so as not to ruin Ruth’s surprise.  Early on day one, I met Rosanne Cash face-to-face for the first time: 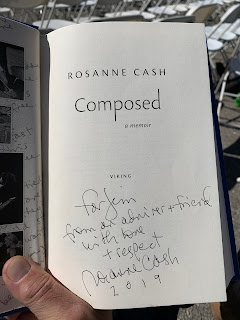 The 5-hour concert on Saturday, headlining Rosanne and Marty Stuart, was the climax of the festival, held in the cotton field next to the Johnny Cash Boyhood Home.  The mood was more like a family reunion than a festival concert--we all felt a deep sense of connection to the place and to each other.  After words and presentations by state and university dignitaries, Rosanne stood alone at the mic and called Ruth to the stage. 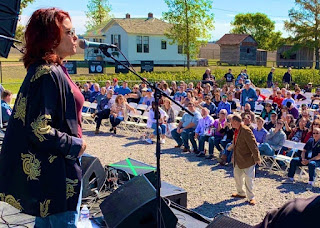 Completely surprised, Ruth was momentarily speechless amid the applause as Rosanne praised her many years work in making the Boyhood Home and the Festival what they are today.  Then Rosanne called me to the stage to present Dr. Hawkins with the painting as the Cash family’s token of gratitude to her—another surprise.  It was a very beautiful, very emotional moment that I’ll never forget as Ruth took in the love from her friends and the crowd.

The ensuing 5 hours of joyful music, which included performances by multiple generations of the Cash family, sent hearts and spirits soaring.  For the final song, all the extended Cash family joined Rosanne and Marty Stuart on stage.  Aunt Joanne Cash Yates, Johnny’s sister, sang the opening line and verse of “Will the Circle Be Unbroken,” then the ensemble joined in.  I’ve never witnessed a more perfect tribute to family, legacy, connection to the land and common roots.

You can see a video of Rosanne's presentation of the painting here.

My deepest thanks to Rosanne Cash, Dr. Ruth Hawkins, Dr. Adam Long, Paula Miles and to Patti. Let’s do it again...

Posted by James Richards at 8:16 PM

James Richards
JAMES RICHARDS is a travel artist, urban designer, author and educator whose work reaffirms and elevates the value of freehand sketching in a digital age. He is a former professor of design and drawing, and an Advisory Board member, blog correspondent and instructor for Urban Sketchers. His on-location sketches and watercolors have been widely published, shown in group and solo exhibitions and seen on NBC Nightly News. His award-winning book Freehand Drawing and Discovery is a text in design schools worldwide. He is a frequent visiting artist at universities, and keynote speaker for conferences and symposia. He travels globally to teach concept drawing and urban sketching workshops.